Neutrino Oscillation at the T2K

Neutrinos are light, uncharged subatomic particles that are emitted in several kinds of nuclear reactions.  These particles come in three flavors, depending on what other particles are involved in the reaction:....": electron (νe), muon (νμ), and tau (ντ).

For decades, physicists have suspected that neutrinos could change or oscillate from one flavor to another. In 2011, physicists on the Japanese Tokai-to-Kamioka (T2K) experiment which studies neutrino oscillations with two separate detectors, documented measurements indicating that muon neutrinos can indeed change into electron neutrinos.

To gather their data, T2K physicists created muon neutrinos and passed them through one detector to count them. Afterwards, the muon neutrino beam is sent 295 kilometers to the SuperKamiokande detector where the neutrinos are counted again.

Image credit: Kamioka Observatory, ICRR (Institute for Cosmic Ray Research), The University of TokyoPassage of the muon neutrino beam underground from the first detector at J-PARC to Super-Kamiokande detector .

After months of observations, the T2K Collaboration, which includes hundreds of researchers from twelve countries, reported the detection of six electron neutrinos at the Super Kamiokande detector. Though more data will be needed to claim a discovery, T2K's results provide strong evidence that muon neutrinos oscillate into electron neutrinos.

Understanding and confirming this oscillation has important implications for understanding the asymmetry between matter and antimatter observed in the universe. 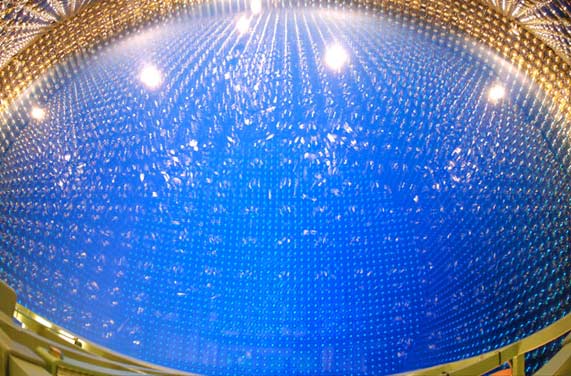 Image credit: Kamioka Observatory, ICRR (Institute for Cosmic Ray Research), The University of TokyoThe walls of Super-Kamiokande detector are lined with more than 10,000 sensitive photo-multipliers which distinguish between muon neutrinos and electron neutrinos. The bottom of the detector is filled with ultra pure water (blue). Golden photo-multipliers cover the walls.