Astrophysicists are able to "explode a star" in a virtual computational laboratory by applying physics to calculate the mechanism and progression of the explosion.

Typically, this application produces a flat (two-dimensional) rendition of varying accuracy. Using U.S. Department of Energy (DOE) supercomputers, scientists at the DOE/NNSA ASC Alliance Center for Astrophysical Thermonuclear Flashes (Flash Center) at the University of Chicago, have been able to successfully demonstrate a self-consistent detonation in a fully three-dimensional simulation of the Type Ia (thermonuclear explosions of white dwarfs) mechanism for the first time. This is shown in a several second movie depicting the fascinating steps in gravitationally confined detonation (GCD) of a Type Ia supernova (a white dwarf explosion).

The Flash Center advance in astrophysical simulation lies its theory of a possible detonation mechanism within the star and in its painstaking and prolonged verification and validation of its data. “This is proof by demonstration of a way that a detonation can happen,” says Dr. Donald Lamb, director of the Flash Center. “The confidence we’re on the right track will increase only with further verification of this model, and by rigorous validation with what astronomers see.”

SciDAC Article:  "Computing the Detonation of a White Dwarf Star"

In this image, the white dwarf star is shown with a green surface.  The burned ash is moving over the surface of the star in outward rings moving towards the poles.  Temperature variations are shown by color, with yellow indicating the hottest areas and blue the coolest. 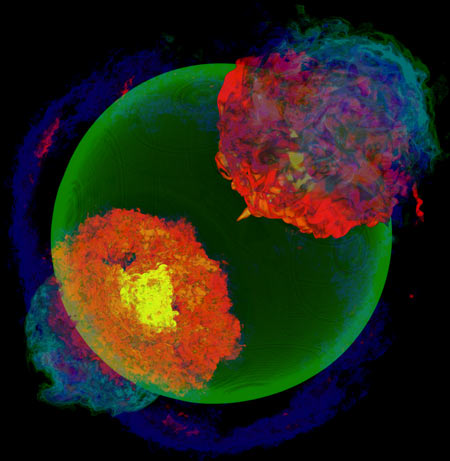 Development of the FLASH Code was funded by the DOE-supported ASC/Alliance Center for Astrophysical Thermonuclear Flashes with support received from Lawrence Livermore National Laboratory and the University of Chicago.