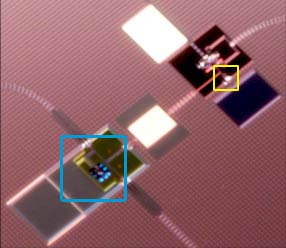 FIGURE 1 The purple paddle (blue box) within the blue highlights of a resonator at ground state vibrates when a quantum of energy is sent from the qubit (yellow box).

The quantum machine used in this research consisted of a mechanical resonator, a capacitor, and a quantum bit (or "qubit"), all resting on a ¼" x ¼" chip. The resonator (blue box in Figure 1) was cooled to its quantum ground state—its lowest possible energy level -using a dilution refrigerator.

After the resonator reached its quantum ground state, a single quantum of energy was sent from the qubit (yellow box in Figure 1) to the resonator. The resonator's tiny purple paddle (in the center of blue highlights) began to vibrate.

Then demonstrating one of the interesting properties of quantum mechanics the resonator was put into an equal probability of its ground state and first excited state, in other words a superposition of vibrating and not vibrating.

Being able to put visible objects in their quantum ground state and control them with such specific precision is so significant that this work was recognized as the "2010 Breakthrough of the Year" by the American Association for the Advancement of Science (AAAS). 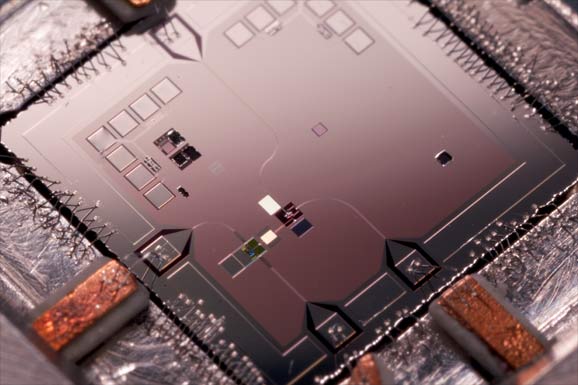 FIGURE 2
Image credit: Erik Lucero
Josephson Junction Quantum Computing
University of California at Santa Barbara The image shows the ¼" x ¼" chip, wirebonded in an aluminum cavity. The mechanical resonator is the green rectangle in the lower left (see FIGURE 1). The smaller white rectangle to the right of the resonator is the capacitor which couples the mechanical resonator to the qubit.