This image graphs the calculated amount of electrons emitted by copper-based superconductors when exposed to ultraviolet light.  The color pattern ranges from low emissions (light blue) to very high emissions (white).  The unique patterns seen in the image are a consequence of the superconducting electrons arranging themselves in a stripelike pattern.

The graph plots the intensity at the Fermi energy in one quadrant of the two dimensional Brillouin zone. The original Fermi surface can be seen as a circular arc, with various images appearing due to zone folding by the magnetic stripe wavevector. The images in the upper left and lower right corners are the pockets observed by quantum oscillation measurements. 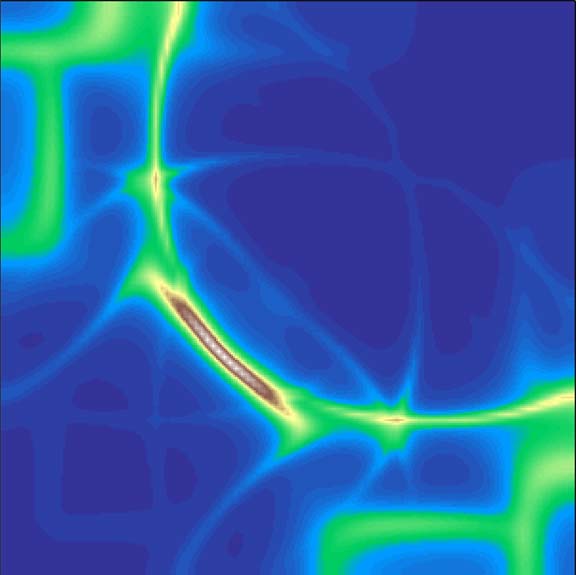 The work for this paper, by Andrew Millis (Department of Physics, Columbia University) and Michael Norman (Materials Science Division, Argonne National Laboratory), was supported by the Department of Energy, the National Science Foundation, and the Aspen Center for Physics.  This image was featured in the APS 2009 March Meeting Image Gallery.